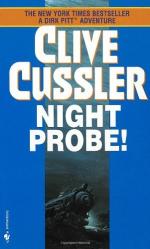 Clive Cussler
This set of Lesson Plans consists of approximately 134 pages of tests, essay questions, lessons, and other teaching materials.

• Richard Essex in on a train traveling though the New York countryside, writing a letter to his wife.

• Five soldiers dressed in civilian clothes are playing cards in the same car.

• Harry Shields is on a sinking Canadian luxury liner that was headed for England.

• Shields can see the body of a girl from another cabin.
• The girl's father comes, and Shields asks him to take a paper in his luggage to the Foreign Office in London.

• The boat sinks and Shields drowns.

• The Western Union night man, Hiram Meechum, thinks the train is late due to weather.
• A tugboat captain complains that a girder from the train bridge hit his boat.

• The train dispatcher calls someone to check the bridge before the...