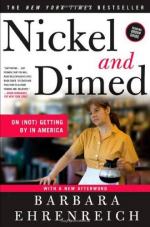 Nickel and Dimed: On Not Getting by in America Test | Final Test - Easy

Barbara Ehrenreich
This set of Lesson Plans consists of approximately 115 pages of tests, essay questions, lessons, and other teaching materials.

3. Ruthie decides to pour _____________ on Barbara's breakfast and jokes again and again that Barbara should be called Barbara Bush.
(a) Orange juice
(b) Tobasco sause
(c) Water
(d) Salt

7. Barbara notes she feels like a fugitive on this assignment, becoming obsessed with the few __________ she's brought along.
(a) Possessions
(b) Credit cards
(c) Newspapers
(d) Dollars

8. Rosalie worked so hard as a _____________ in her childhood that her rotator cuff is damaged, though she continues to work through the pain.
(a) Maid
(b) Dishwasher
(c) Berry picker
(d) Rice picker

9. What is the next place Barbara goes to in order to try to avoid drug testing and get more money?
(a) Lowes
(b) Home Depot
(c) Friedmans
(d) Menards

11. What does the author have to do once she is done with the testing process at Wal-Mart?
(a) Train five new people
(b) Read a book
(c) Start a shift
(d) Drug test

13. The obvious __________ of the sales company is a breath of fresh air for the author compared to the false concern from Wal-Mart.
(a) Ignorance
(b) Greed
(c) Principles
(d) Scam

14. What is interesting about the test Barbara takes when she applies at Wal-Mart again?
(a) She fails the test and gets thrown out
(b) She gets answers 'wrong'
(c) It's not the same as the last one she took
(d) There is no record of her last test

15. Barbara describes a feeling of hopeless __________ in her position as a maid, even when she is in public in her uniform.
(a) Invisibility
(b) Poverty
(c) Anger
(d) Frustration

1. What is the made-up name for the apartments that Barbara finally finds in Minnesota?

2. How long does the shift at Menards turn out to be when they call again the next day before she goes to work?

3. Which department is Barbara placed into when she goes back to Menards to find out about the job?

4. What does Barbara continue to look for since she does not know the result of her drug test?

5. What does Barbara accidentally shatter in her efforts to help Holly not have to work as hard?

More summaries and resources for teaching or studying Nickel and Dimed: On Not Getting by in America.

Nickel and Dimed: On Not Getting by in America from BookRags. (c)2021 BookRags, Inc. All rights reserved.