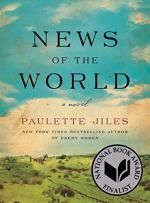 News of the World Fun Activities

Paulette Jiles
This set of Lesson Plans consists of approximately 164 pages of tests, essay questions, lessons, and other teaching materials.

Casting News of the World

What do you think Jiles is like as a person? What would your life be like if you emulated her? What can you tell of her as a role model? What would you like to know about her?

News of the World — The Musical

What happens when Captain Kidd or Johanna walks into a bar...

News of the World from BookRags. (c)2021 BookRags, Inc. All rights reserved.