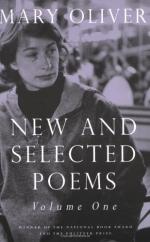 Mary Oliver
This set of Lesson Plans consists of approximately 122 pages of tests, essay questions, lessons, and other teaching materials.

1. In Work Sometimes, what does Oliver say happiness truly is?

In Work Sometimes, Oliver states that happiness is generally found in good work ongoing. The idea is that productive work on good things makes one feel useful, and this feeling brings one happiness.

2. In Work Sometimes, what are some of the things that Oliver lists as NOT leading to happiness?

Oliver lists a few things that people sometimes think leads to happiness, but ultimately do not, like a town on a map, an early arrival, or a job well done.

3. How did Oliver feel at the beginning of Work Sometimes and why?

Oliver felt sad and lonely. She seemed to be overwhelmed by the load of work she had before her.

4. How did Oliver feel at the end of Work Sometimes?

At the end of Work Sometimes, Oliver felt much better than she had at the beginning. She felt freer and happier and was ready to get out and do something.

More summaries and resources for teaching or studying New and Selected Poems.