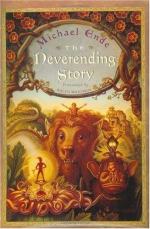 1. Describe Bastian's character in the prologue.

Bastian Balthazar Bux is a short, fat child who is about ten-years-old. He is teased by his schoolmates, which causes him to flee and hide. This time, he hides in a bookstore where he meets an irritable old man.

2. Describe the owner of the bookstore where Bastian hides.

Carl Conrad Coreander is an irritable old man that doesn't seem to like being interrupted. He irritably asks Bastian the uncomfortable question of why the boys tease him and cause him to hide. Mr. Correander is, luckily, easily distracted.

3. Why does Bastian admit to Mr. Coreander that his schoolmates tease him?

Bastian explains that he is often teased because he likes to tell stories. Sometimes he even tells stories to himself, since he doesn't think that anyone else would wnat to listen to them. So, he doesn't fit in with his classmates.