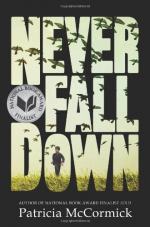 1. What sport do the rich kids play in the yard of their school in the first part of the book?
(a) Soccer.
(b) Basketball.
(c) Volleyball.
(d) Lacrosse.

2. From where does Chantou send Arn a letter?
(a) From a mountain camp.
(b) From their home village.
(c) From an opera house in Thailand.
(d) From her adoptive parents' home in America.

3. The Khmer Rouge tell the band that they are going on a trip and everyone is expecting to be killed. Instead, what happens?
(a) They embark on a tour of the agricultural fields in order to entertain the workers.
(b) They are put into the back of a truck and driven around for hours in order to disorient them.
(c) They go to a nearby village and are ordered to kill everyone living there.
(d) They are permitted to go the Thailand border to see if they can find their family members.

6. What is the stringed instrument called that Arn learns to play in the band?
(a) Dulcimer.
(b) Harpsichord.
(c) Viola.
(d) Khim.

7. In order to add to his fame even more and thus add to his probability of survival, Arn adds what talent to his repertoire in addition to his playing of the khim?
(a) Storytelling.
(b) Dancing.
(c) Playing the fiddle.
(d) Acting out theater scenes.

8. When the Khmer Rouge soldiers take all of the captives' clothes and burn them, what clothing do they provide instead?
(a) Yellow uniforms.
(b) Green uniforms.
(c) Black uniforms.
(d) Red uniforms.

9. What method does Mek, the new music teacher, tell Arn that he uses to survive?
(a) He watches the birds fly.
(b) He composes music.
(c) He thinks about one hour at a time.
(d) He dreams.

10. What does Arn do with the lump of sugar the kitchen girl gives him after she is done with him?
(a) He gives it to Kha.
(b) He throws it into the jungle.
(c) He gobbles it down once he leaves her tent.
(d) He sneaks into Mek's tent and shares it with him.

13. What is Arn's solution for helping Siv remember not to hold the flag in front of Arn's face at the end of the dance?
(a) He explains to Siv that he's ruining the dance and reducing Arn's chances at fame.
(b) He threatens to break his flag.
(c) He offers to switch dancing roles with him.
(d) He steals some rice for him.

15. What is the event that first causes Arn to think maybe the Khmer Rouge have evil intentions?
(a) He sees a soldier kill a boy when the boy refuses his request for a motorcycle ride.
(b) He sees a soldier speaking roughly to a monk at his temple school.
(c) A soldier sees Arn selling his wares on the street and tips over his cart for no apparent reason.
(d) Hi sister tells him that all of the girls in the village are being rounded up by the soldiers in order to force the girls to cut their hair short.

1. What does the new music teacher give Arn as the reason that he does not care whether he lives or dies?

2. When the high-ranking soldiers for whom the band played has taken their leave, what is NOT a rule put in place by the remaining Khmer Rouge soldiers?

3. Where do Arn and Munny go after the American movie to play a pretend game of war?

4. What event causes Arn to sneak out and plead with the new music teacher to start exerting effort in his teaching?

5. What reason does Arn give for not eating the human liver that the Khmer Rouge soldier forces him to cook?