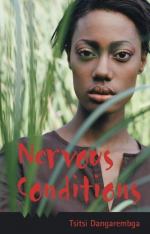 Tsitsi Dangarembga
This set of Lesson Plans consists of approximately 130 pages of tests, essay questions, lessons, and other teaching materials.

This quiz consists of 5 multiple choice and 5 short answer questions through Chapter Five.

2. How does Nhamo perform in school?
(a) He is an average student.
(b) He does not attend school.
(c) He performs poorly in school.
(d) He excels at school.

3. What excuse does Maiguru make as to why Nyasha can't play with the other children?
(a) She is too young.
(b) She is too fearful.
(c) She is too tired.
(d) She is too old.

4. How does Tambu's father react to the news that she cannot attend school?
(a) He is pleased.
(b) He is apathetic.
(c) He is saddened.
(d) He is confused.

1. Where does Tambu's mother work?

2. Which of the following bits of advice is NOT given to Tambu during her formal welcoming speech?

3. Why does Tambu believe she was passed over for education by Babamukuru?

4. How does Nyasha feel about her family's maid?

5. To which of the following places does Tambu compare Babamukur's home?