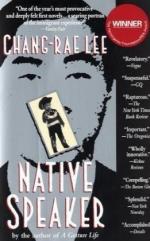 Chang-Rae Lee
This set of Lesson Plans consists of approximately 113 pages of tests, essay questions, lessons, and other teaching materials.

1. Which ethnicity is John Kwang?

3. What type of relationship does John Kwang and Henry share?

4. What happens when Henry goes to Molly's apartment and tries to contact Lelia?

5. Who did Henry's father bring home from the airport?

1. What is Henry's response when he is asked about his profession?

2. Describe Wen Zhou and why he was an interest to Henry's company.

3. How does John Kwang dress?

4. Which employees does Kwang show favoritism to?

7. In what manner did Henry's father run his businesses when he was alive?

8. What happened to Lelia while she was in Europe?

10. How do Kwang's closest employees treat him?