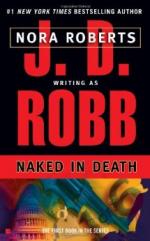 • Reader is introduced to Eve Dallas.

• Dallas works for the New York Police and Security Department.

• Dallas wakes up the morning after being forced to kill a suspect.

• Dallas is scheduled for testing.

• Dallas is called into another high-profile case.

• Reader is introduced to Ryan Feeney.
• Dallas meets Feeney at the crime scene.

• The victim is Sharon De Blass, a licensed prostitute.

• A note is left at the scene.
• Dallas begins interviews.

• Dallas learns that De Blass had a date with a man named Roarke.

• De Blass' grandfather is a senator.

• Senator owns handguns which have been banned.

• The security tapes in DeBlass' building have been partially erased.

• When Dallas arrives at home she finds a video...