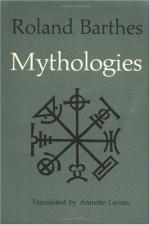 1. What does the author argue takes precedence over the human life in "The Blue Guide"?
(a) Lakes.
(b) Monuments.
(c) Buildings.
(d) Cities.

4. According to the author, French toys always mean what?
(a) Something.
(b) Trouble.
(c) Creativity.
(d) Nothing.

5. "Which phrase concludes "The Nautilus and the Drunken Boat"?
(a) "A genuine poetics of exploration."
(b) "Can make man proceed from a psycho-analysis of the cave."
(c) "Which comes close to the infinite."
(d) "It constantly begets departure."

7. The author claims that according to the magazine article in "Novels and Children," women are what sort of species?
(a) "Naive."
(b) "Superior."
(c) "Inspirational."
(d) "Homogenous."

8. How is a writer's holiday different from another tradesman according to the author in "The Writer on Holiday"?
(a) He continues to work.
(b) He travels further from home.
(c) He spends more money.
(d) He drinks more.

9. Which of the following is not one of the things the author says of steak in "Steak and Chips"?
(a) "The comfortable bourgeois meal."
(b) "The bachelor's bohemian snack."
(c) "A part of all the rhythms."
(d) "The reason there is supper."

10. How does the author refer to the magazine he writes of in "Ornamental Cooking"?
(a) "A highly valuable journal."
(b) "Impossible recipes, absurd photographs."
(c) "A pompous collection of reviews."
(d) "Pages that turn in parallel with the times in which we live."

11. Which of the following is not another "great spectacle" the author mentions in "The World of Wrestling"?
(a) Defeat.
(b) Justice.
(c) Misery.
(d) Suffering.

12. What sort of wrestling does the author define as portraying the ongoing battle between good and evil in "The World of Wrestling"?
(a) Russian wrestling.
(b) French wrestling.
(c) British wrestling.
(d) American wrestling.

13. Which of the following is not a sign of apostleship in "The Iconography of Abbe Pierre"?
(a) A sheepskin coat.
(b) A constant hold of the Bible.
(c) A benign expression.
(d) A missionary's beard.

14. What does the author suggest is saintly about the Abbe Pierre?
(a) The work.
(b) The beard.
(c) The clothing.
(d) The haircut.

2. What other alcoholic beverage is wine contrasted to in "Wine and Milk"?

3. What does the ship become in "The Nautilus and the Drunken Boat"?

4. Who does the author say would not "know" the Jet-Man?

5. "Criticism must be neither a parlour game, nor a _____." How is this quote from "Neither-Nor Criticism" finished?