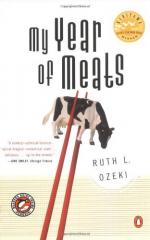 1. What about Jane is annoying Gale, Bunny Dunn's son?
(a) She insults his knowledge.
(b) He does not like talking to women.
(c) Jane complains about being at the feed lot and its conditions.
(d) All of Jane's questions about the chemicals for the cows.

2. What does Jane think about Sloan's offer to giver her money?
(a) He is not interested in a future with her.
(b) He does not love her.
(c) He wants to protect her.
(d) He does not want a baby but wants her.

3. While Jane's personal life is becoming very happy, what is happening to her career?
(a) It is coasting and no improvements have been made.
(b) It is also going well.
(c) She will have to change careers soon.
(d) It is spinning out of control.

6. Why is Jane arrested in Montana?
(a) They think it is suspicious for so many Japanese people to travel together.
(b) She is driving illegally.
(c) Her crew does not have work visas.
(d) They think her group is a Mexican terrorist group.

10. What seems to have happened between Akiko and Jane?
(a) They have become best friends.
(b) Their luck in life has swapped places.
(c) They are bosom buddies.
(d) They have changed their personalities.

2. Because of the two new shows, what could Jane lose?

3. Who gives Jane the bad news that causes Sloan to be mad at her?

4. While at the farm, about what does Jane become worried?

5. Meanwhile, what is happening to Akiko?