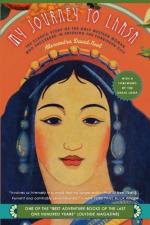 My Journey to Lhasa Chapter Abstracts for Teachers

Alexandra David-Néel
This set of Lesson Plans consists of approximately 154 pages of tests, essay questions, lessons, and other teaching materials.

• In her Introduction to My Journey to Lhasa, Alexandra David-Neel provided the background for her trek, her fifth into Tibet.

• Since her childhood, David-Neel held a stirring drive to seek out isolated parts and to travel.

• David-Neel studied both comparative religion and Oriental philosophy, and then she became a professor at a university in Belgium.

• In 1910, the French Ministry of Education sent David-Neel on a research expedition during which she met the Dalai Lama of Tibet who was in exile.

• Later, David-Neel lived as a guest of the Penchen Lama in Tibet, who provided her access to religious texts.

• Political instability resulted in the Chinese being run out and foreigners being banned in Tibet, except with rare special permission.

• It was this "absurd" prohibition that stirred David-Neel to make her fifth trek into Tibet, this time to Lhasa.

• Chapter I had David-Neel and her adopted...