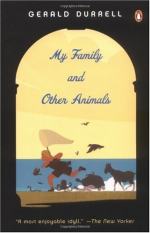 My Family and Other Animals Fun Activities

Gerald Durrell
This set of Lesson Plans consists of approximately 140 pages of tests, essay questions, lessons, and other teaching materials.

A Descriptive Kind of Guy

One thing that stands out in "My Family and Other Animals" is Gerry's elaborate descriptions of people, animals, things, bodies of water, and landscape. How is it that a child so young can grasp and communicate such details? Come up with a theory of why Gerry is so descriptive.

All the World is a Stage

Mother, Larry, Leslie, Margo, Gerry, and Gerry's animals are quite an exciting group at times. Gerry describes their chaotic encounters with hilarious detail. Create sock puppets, or popsicle puppets, and put on a play displaying one of the Durrell family's chaotic encounters.

Roger serves as Gerry's best friend on the island, going everywhere with him, and even hanging around the house with Gerry during his lessons. There are descriptions of Roger throughout the book. Based on those descriptions, what kind of dog do you...

My Family and Other Animals from BookRags. (c)2021 BookRags, Inc. All rights reserved.