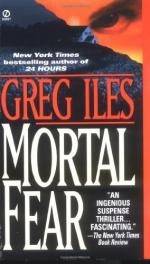 • The story opens with a letter from the killer to his father, describing a trip across New Orleans the killer has taken to locate and kill Karin Wheat.

• Harper Cole is a system operator on the EROS system, and he has detected a connection between the death of Karin Wheat and six other women.

• He calls the New Orleans Police Department and tells Michael Mayeux about the connection.

• Harper is a stock trader, but only trades his own money.

• Harper is reluctant to have children because of an old affair that Harper had with Drewe's sister, Erin, during which they conceived a child...