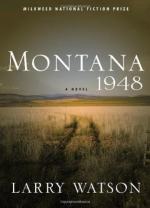 Larry Watson
This set of Lesson Plans consists of approximately 125 pages of tests, essay questions, lessons, and other teaching materials.

Draw a picture of one of the characters from Montana 1948.

Create a list of actors to play the major characters and explain why you chose those actors.

Write a biographical paragraph about one of the major characters.

You are a journalist with People magazine. Write 10 questions that you will use to interview David for an upcoming issue.

In groups, create a new title for Montana 1948. Have the class vote on the best one.

Have the class write a brief plot that covers what happens in the next five years of David’s life.