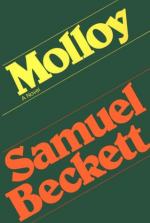 Samuel Beckett
This set of Lesson Plans consists of approximately 151 pages of tests, essay questions, lessons, and other teaching materials.

If you were an editor with Molloy on your desk, what changes would you ask for?

What happens when Molloy walks into a bar, or tries to change a light bulb? Make jokes out of the characters and events described in Molloy.

Stage a scene from Molloy. Maybe ask different groups of students to perform the same scene, interpreting it differently.

More summaries and resources for teaching or studying Molloy: A Novel.