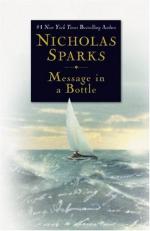 1. How does Theresa get a copy of the letter discussed in the article she found online?
(a) She buys it.
(b) She asks politely.
(c) She blackmails the person.
(d) She steals a copy.

2. What is Garrett not bothered about while on his second date with Theresa?
(a) Theresa found the messages.
(b) Theresa asked him to dinner.
(c) Theresa was married before.
(d) Theresa already has a child.

1. What does Theresa discover during her research on messages in bottles?

2. How does Deanna treat Theresa?

3. What is the breakfast conversation about between Garrett and his host the day after Garrett's first date with Theresa?

4. What information do Garrett and Theresa exchange at the end of their first date?

5. What is Garrett's full name?

1. What clues did Theresa and Deanna find in the message?

2. What reasons does Theresa have for finding the man who wrote the messages?

3. What advice does Jeb gave Garrett concerning his long grieving?

4. Where does the letter come from and who determines the location from which it was sent?

5. What were the two main uses of messages in a bottle throughout the years?

6. What story did the prologue reveal about messages in bottles?

7. How do Garrett and Theresa meet the second time?

8. Why does Theresa think publishing the letter is morally wrong?

9. Why does Theresa want to put everything aside after finding the second message?

10. Why did Theresa divorce David and what happened with him afterward?

More summaries and resources for teaching or studying Message in a Bottle.

Message in a Bottle from BookRags. (c)2022 BookRags, Inc. All rights reserved.