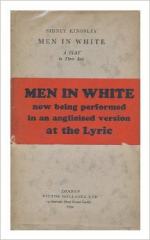 Sidney Kingsley
This set of Lesson Plans consists of approximately 134 pages of tests, essay questions, lessons, and other teaching materials.

1. Who does Laura think she has offended by entering the hospital library?
(a) Ferguson.
(b) Cunningham.
(c) Hochberg.
(d) McCabe.

3. Who does Mary tell Hochberg was the father of Barbara's baby?
(a) She doesn't say.
(b) Cunningham.
(c) Hudson.
(d) Michaelson.

1. What does Mary caution Ferguson about regarding going into Barbara's room?

2. What does Ferguson tell Laura when she realizes he had an affair with Barbara?

3. What do the doctors make jokes about during the meeting?

4. What does Laura say she will do if Ferguson decides to study with Hochberg and not accept the administrator job?

5. Who is upset that his son has not been named an intern at the hospital?

More summaries and resources for teaching or studying Men in White.