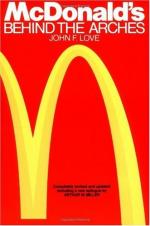 1. What did McDonald's need to secure mortgage loans for multiple stores and large lenders?
(a) A new committe.
(b) A new recipe.
(c) Another strategy.
(d) A CEO.

2. What famous icon became associated with McDonald's, after being effective with the children?
(a) The farm animals.
(b) Ronald McDonald.
(c) Bozo the Clown.
(d) Sneaky creatures.

9. What type of problems did McDonald's face in the 1970s?
(a) Public relations and profitablity.
(b) Respect.
(c) Cleanliness.
(d) Management.

11. How did the international branch of McDonald's raise its food profile?
(a) Advertisement.
(b) Cheap prices.
(c) Better quality of food overseas.
(d) Coupons.

13. What type of strategy is formed when the land owner subleases to the franchises?
(a) A contractual stragtegy.
(b) A sandwich stategy.
(c) An agreement strategy.
(d) A contracting relationship.

1. Who ran McDonald's longer than its founder, yet never showed Kroc up?

2. What did the new strategy of Sonneborn's immediately create?

3. What was the name of the theme park McDonald's considers developing?

4. When was Ronald McDonald birthed as the face of McDonald's?

McDonald's: Behind the Arches from BookRags. (c)2022 BookRags, Inc. All rights reserved.