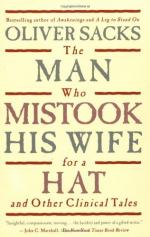 Proprioceptionappears in non-fiction - Discovered in the 1890s by Sherrington, this is regarded as a hidden or "sixth" sense. It monitors the movable parts of our body--muscles, limbs, tendons, joints--in an unconscious way. People are usually not aware of it until they loose a limb and experience phantom pain or sensations.

Retrograde Amnesiaappears in non-fiction - This type of disorder basically erases a part, small or large, of a person's life. In the case of Jimmie G., he is unable to remember anything that happened after 1945. He lives in a world that does not include anything that happened after this point in time and he is startled when confronted by evidence that time has passed. In other cases the patient may only loose sections of time, perhaps a few years or only months that they can no longer recall.

Pithedappears in non-fiction - This is the...