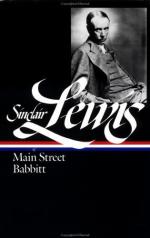 Sinclair Lewis
This set of Lesson Plans consists of approximately 106 pages of tests, essay questions, lessons, and other teaching materials.

Miles Bjornstam - This character likes to talk of Socialism.

Cyrus Bogart - This teenager attempts to take advantage of a teacher.

Maud Dyer - This character offers a flirtatious invite for a beer.

Elizabeth - The nickname of a would-be designer.

Carol Kennicott - This newcomer to Gopher Prairie tries to impress others with parties.

Doctor Will Kennicott - A respected care-taker in Gopher's Prairie.

Adolph Morgenroth - This farmer undergoes an amputation on a kitchen table.

Guy Pollock - A lawyer with the...

More summaries and resources for teaching or studying Main Street.