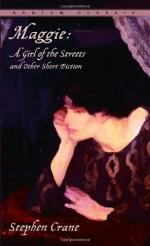 Maggie: A Girl of the Streets Multiple Choice Test Questions

Stephen Crane
This set of Lesson Plans consists of approximately 122 pages of tests, essay questions, lessons, and other teaching materials.

3. What is Jimmie standing on as he curses his opponents in the street fight?
(a) An overturned bucket.
(b) An old apple crate.
(c) A pile of scrap lumber.
(d) A heap of gravel.

5. Which group of boys is winning the street fight before it is broken up?
(a) The Rum Alley boys.
(b) The Evil's Row boys.
(c) The Devil's Row boys.
(d) The Black Door boys.

More summaries and resources for teaching or studying Maggie: A Girl of the Streets.

Maggie: A Girl of the Streets from BookRags. (c)2022 BookRags, Inc. All rights reserved.