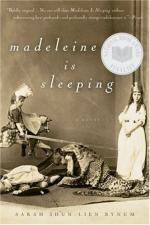 Madeleine is sleeping. She dreams up a hugely fat woman named Matilda. The children in town taunt Matilda by throwing handfuls of lard at her. One day, the grotesque woman feels an odd sensation in her back. She has sprouted wings! With her diary in hand, she floats around town making observations which she records. The objective of this lesson is to analyze the purpose behind the existence of Matilda's character.

1) Class discussion: Discuss with the character of Matilda with the class. Why does Madeleine dream of her? Why do the children in town throw lard at her? Are they justified in their actions? Why or why not? What purpose might her character serve throughout the story?

2) Groups: Break into groups of three or four. Discuss how Matilda's character might play an important role in the story. How might having wings and being able to...