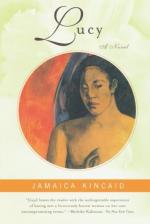 Jamaica Kincaid
This set of Lesson Plans consists of approximately 113 pages of tests, essay questions, lessons, and other teaching materials.

Research the music of the mid-20th century in America and create a CD to share with the class. Be sure to include some calypso music as a recognition of Lucy's island heritage.

Imagine that you could have a conversation with Kincaid's laptop. What do you think it would say? What questions would you ask?

Write the names of the characters from the novel on slips of paper and place them in a hat...