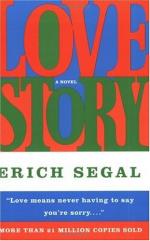 Erich Segal
This set of Lesson Plans consists of approximately 140 pages of tests, essay questions, lessons, and other teaching materials.

1. What does Oliver believe Phil will think about the couple's plans?

2. What does this chapter foreshadow in terms of Oliver and his father?

3. What is Oliver's response to what Jenny says?

4. What is the occupation of Jennifer's father?

5. What does Oliver's father want him to do after graduating college?

1. What does Oliver hear when he goes over to Jenny when he's picking her up and what does he say? How does she answer?

2. When and under what circumstances does Oliver go to the Radcliffe library?

3. What does Oliver admit about his relationship with Jenny?

4. Why is Oliver nervous about meeting Jenny's father?

6. How does Oliver feel when he sees Jenny after the game and what does he do?

7. What does Oliver refuse to tell Ray and what does he continue to deny?

8. How does dinner with Jenny and Oliver's parents go and why?

9. How do Jenny and Oliver feel about Oliver III's new appointment?

10. What surprises Oliver about sex with Jenny?

The reader watches the two Olivers interact and has to wonder if this sense of competition is mostly a product of Oliver's imagination rather than a true competition that his father has initiated.

1. Do you think Oliver is imagining his father's motivations and feelings? Why or why not?

2. All people attribute feelings and thoughts to other people without knowing whether they are true. Explain a situation in which you, or someone you know, assumed a person thought one way and it was not true.

Oliver refuses to tell his father the truth and allows him to believe he got some girl in trouble.

1. Why do you think it is easier for Oliver to let his father think something bad of him then to tell him the truth?

2. Do you think Oliver should have told his father the truth? Why or why not?

At the hospital, Oliver authorizes the doctor to do whatever needs to be done to make Jenny comfortable.

1. What do you think Oliver might be able to do to handle this stage of Jenny's illness?

2. Do you think this part of Jenny's illness is more difficult for Oliver than Jenny? Why or why not?

3. Describe a time in your life when you or someone you know was faced with a friend or relative dying.

More summaries and resources for teaching or studying Love Story.