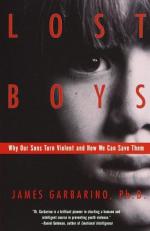 Lost Boys: Why Our Sons Turn Violent and How We Can Save Them Test | Mid-Book Test - Easy

James Garbarino
This set of Lesson Plans consists of approximately 143 pages of tests, essay questions, lessons, and other teaching materials.

2. What has been found to lower as developmental threats accumulate?
(a) Temper.
(b) IQ.
(c) Body temperature.
(d) Blood pressure.

6. What does Garbarino accuse people of not wanting to do, when it comes to violent youth?
(a) Punish them.
(b) Listen to them.
(c) Incarcerate them.
(d) Understand them.

8. What do these various options for early violent behavior often depend on?
(a) A stable home environment.
(b) A willingness on the part of the child.
(c) An end to any drug addiction.
(d) An availability of social resources.

11. How many teenagers report they could obtain a gun within an hour?
(a) One third.
(b) Three fourths.
(c) One fourth.
(d) Two thirds.

12. What does the author argue is the other factor when, combined with rick factors, influences homicide rates?
(a) Economic status.
(b) The role of race.
(c) Gender.
(d) Race.

13. What book is a favorite of the boys at the center?
(a) To Kill a Mockingbird.
(b) Red Mars.
(c) Autobiography of Malcolm X.
(d) Catcher in the Rye.

14. What is Garbarino trying to point out throughout these chapters, in terms of the cause of aggressive behaviors?
(a) Only biological triggers are important.
(b) Only peer structure is important.
(c) Everything must be taken in context.
(d) Only the family unit is important.

1. What does Julio represent?

2. What clothing item differentiates the levels of progress within the center?

3. What is often the result of emotional disassociation?

4. What does Garbarino claim is inside almost every violent teenager?

5. How many kids with negative and aggressive social maps become violent?