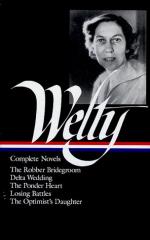 Eudora Welty
This set of Lesson Plans consists of approximately 130 pages of tests, essay questions, lessons, and other teaching materials.

1. What is the only place that is opened, but has no phone, on the day of Judge Moody's wreck?
(a) The post office.
(b) The goods store.
(c) The airport.
(d) The icehouse.

4. Where do Jack and Gloria sit together after he chases her around Banner Top?
(a) The river bank.
(b) The jumping-off place.
(c) The riverwalk.
(d) In a tree.

6. What is painted on the sign that Gloria bumps her head on?
(a) No Parking.
(b) Enter at your own risk.
(c) Destruction is at Hand.
(d) Beware.

7. Who does Jack try and get to hold his baby when he tries to help Gloria after she has fallen at Banner Top?
(a) Ralph.
(b) Nathan.
(c) Aycock.
(d) Noah.

8. What is the name of the river that runs through Banner?
(a) Cahaba River.
(b) Bywy River.
(c) Mississippi River.
(d) Jonestown River.

10. What is the only thing the person who Jack and Gloria first run into during their journey doesn't drop when they reach him?
(a) His gun.
(b) His hat.
(c) His wallet.
(d) His Bible.

11. On what day does Uncle Homer say voting would take place for his election against Curly?
(a) Wednesday.
(b) Friday.
(c) Tuesday.
(d) Monday.

12. What is the name of the person who arrives with Curly to arrest Jack for the first time?
(a) Homer Champion.
(b) Ralph Renfro.
(c) Willy Trimble.
(d) Percy Beecham.

13. What does Jack tell the judge that Curly is after admitting to the charges placed against him?
(a) A nuisance.
(b) Aggravating.
(c) A bother.
(d) Annoying.

14. Which of the following things is not mentioned as being inside Uncle Curtis' car when he arrives at the reunion?
(a) Apples.
(b) Dogs.
(c) Peaches.
(d) Children.

1. At what time does Curly come to tell Jack he must be at the courthouse on his wedding night?

2. Who arrives at the wreck scene and is told by Jack to take the Moody's to the reunion?

3. What does everyone at the reunion rely on Uncle Homer and Auntie Fay to bring to the reunion?

4. What is the name of the schoolteacher in the town as told in Part 1?

5. Which of the following items does Gloria and Jack not hand back to the first person they run into during their journey in Part 2?