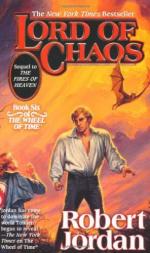 Objects & Places from Lord of Chaos

Robert Jordan
This set of Lesson Plans consists of approximately 150 pages of tests, essay questions, lessons, and other teaching materials.

This is the capital city of the kingdom of Andor, from which Rand now rules and plots.

This is the capital city of the kingdom of the same name, and one of the cities over which Rand holds reign.

This is the island city where the White Tower is, where Aes Sedai are headquartered and teach female students the art of channeling.

This is a southern, seaside kingdom, now ruled by Lord Brend, who is the evil Forsaken Sammael in disguise.

This is the small farming community in the Two Rivers district where many of the principle characters are born and raised.

This is a small, wooded community made by the Aes Sedai and Warders who fled when the White Tower was split.

This is the home of the Pit of Doom, wherein rests the Dark One himself...