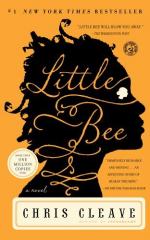 Related Topics
Everyone Brave Is Forgiven

Chris Cleave
This set of Lesson Plans consists of approximately 120 pages of tests, essay questions, lessons, and other teaching materials.

• Little Bee is illegally released from a British detention center in London.

• She is scared to be free after two years in the custody of immigration.

• Little Bee calls Andrew O'Rourke, who she met on a beach in Nigeria, and goes to see him.
• Chapter 2:

• Even numbered chapters are told from Sarah's point of view.

• Little Bee arrives at Andrew's to discover he has killed himself.

• Little Bee attends the funeral with his wife, Sarah, and their son, Charlie.

• Sarah realizes that she ignored the signs of her husband's distress.

• Andrew was ashamed of his behavior the day he met Little Bee in Nigeria and failed to save her sister from death.

• Charlie is distraught at the funeral and Little Bee comforts him.

More summaries and resources for teaching or studying Little Bee: A Novel.