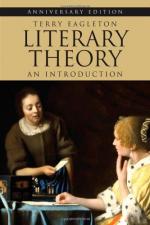 Terry Eagleton
This set of Lesson Plans consists of approximately 141 pages of tests, essay questions, lessons, and other teaching materials.

1. According to Eagleton, William Empson "insists on treating poetry as a species of ______language."
(a) Ordinary.
(b) Spectacular.
(c) Secular.
(d) Religious.

2. What person is NOT included in the ranks of Russian formalists?
(a) Viktor Shklovsky.
(b) Heinrich Wolffin.
(c) Boris Tomashevsky.
(d) Roman Jakobson.

4. For the economist Eagleton discusses, "those economists who dislike theory or claimed to get along better without it" were what?
(a) Had no knowledge of any theory.
(b) In the grip of the most current theory.
(c) Didn't understand the importance of theory.
(d) In the grip of an older theory.

5. According to Eagleton, the sentence "this is awfully squiggly handwriting" from Knut Hamsun's "Hunger" tells him its literary because of what reason?
(a) The ideas.
(b) The context.
(c) The content.
(d) The facts.

1. According to Eagleton, who "harnessed this Romantic humanism to the cause of the working class" in the late nineteenth-century?

2. According to Eagleton, the literary work in Romantic society is seen as a ________ that is in contrast to the "fragmented individualism" of capitalist society?

3. The Russian formalists rejected what kind of doctrines that had influenced literary criticism?

4. Who wrote "What is Literature" on literary reception and was published in 1948?

5. The distinction between fact and fiction in defining literature is what?

1. What was the romantics relationship to the symbol and why is it significant?

2. What is the significance of Viktor Shklovsky's 1917 essay "Art as Device," according to Eagleton?

3. What period of literature did the critic Roland Barthes focus on and why is it significant?

4. In the nineteenth century, what was the outcome of religion as a result of the industrial revolution where new technologies and science were being developed?

5. Who developed reception theory and why is it significant?

6. What is the reach of the "theoretical revolution" and why is it significant?

7. How is Martin Heidegger's philosophy similar to that of the Russian formalists?

8. What did new American criticism focus on and why is it significant?

9. How does Eagleton respond to critics who claim that literary theory as irrelevant or elitist and what are its implications?

10. How has the population in higher education changed in Britain since the 1960s and what it its significance?