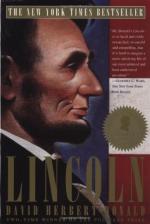 Describe the role of experiential learning in Lincoln's career, both as a young man and as President. How did he learn, and what made his judgment trustworthy? What errors did he make?

Lincoln was engaged three times before he finally married his third fiancée. Compare and contrast his private life and his relationship with his wife, and his public life and his career as a politician. Was he the same person in either circumstance, or did he live a split life between the two spheres?

When Lincoln declined to serve in a seat he had won, he ended up back in Springfield, where he was involved in local politics and...