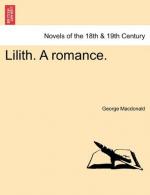 George MacDonald
This set of Lesson Plans consists of approximately 128 pages of tests, essay questions, lessons, and other teaching materials.

Have each student select a character from slips of paper in a bag and act as that character. Suggested characters: Raven/Adam, Cat-Woman/Mara, Lilith/the Princess, Eve, Lona Odu and Sozo, Luva, Tumbledown, the Butler, the White Leopard, the Fugitive Mother.

Write an epitaph and obituary notice for Lilith.

Create a trivial game based on Lilith and have students play the game in groups then have the winner of each group game compete for class champion. Create five game pieces that incorporate something from Lilith.

Create three posters about Lilith using a variety of media (chalk, paint, markers, watercolors, etc..). These posters might be used to advertise the book's release.

Talk about Lilith to another class who has not read the book. Include a short reading to encourage students in the other class to want to read this...

More summaries and resources for teaching or studying Lilith.