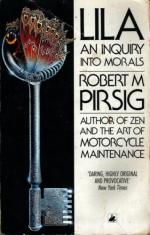 Related Topics
Zen and the Art of Motorcycle Maintenance

1. Why is Jamie suspicious of Lila's offer in Chapter 16?
(a) He knows Lila is in love with him.
(b) He believes Phaedrus is actually smuggling drugs.
(c) He knows she is trying to pull a scam.
(d) He does not trust Phaedrus to not rob him.

4. Why does Phaedrus consider himself to part of the hulking "Giant" from Chapter 17?
(a) His publisher lives in that city.
(b) His books are popular in that city.
(c) He supports that city politically.
(d) He vacations frequently in that city.

1. What is the name of Lila's childhood dog?

2. Where does the hallucination of Lila's dog lead her at the end of Chapter 23?

3. What does Lila pull from the water at the end of Chapter 23?

4. For what reasons does Phaedrus initially grant the film rights to the actor in Chapter 19?

1. How does Phaedrus's musings on the Victorians bring him back to his initial ideas on the American Indians?

2. What are Phaedrus's thoughts on the static and dynamic patterns of New York City?

3. Why does Lila stop at the restaurant in Chapter 18?

4. Why does Lila leave the name of the boat with the waiter and what does this imply about her plans?

5. How does war factor into the Victorian beliefs?

6. How does Phaedrus connect the Zen concept of hell to celebrity?

7. How did the Victorian mindset leave society unprepared to deal with the realities of World War I?

8. How did intellect begin to replace societal concerns after World War I?

9. Why does Lila decide she needs to leave Phaedrus?

10. What does Phaedrus deduce about Lila from his meeting with her friends?

More summaries and resources for teaching or studying Lila: An Inquiry Into Morals.

Lila: An Inquiry Into Morals from BookRags. (c)2020 BookRags, Inc. All rights reserved.