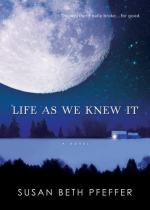 Life as We Knew It Chapter Abstracts for Teachers

• Miranda is a 16-year old girl who lives with her mother and younger brother.

• Miranda’s story is told through her diary entries.

• On May 7, Miranda’s father calls and announces that he and his new wife are having a baby in December.

• The school year is about to end, and Miranda is studying for tests.

• She asks her mother if she can take figure skating lessons, but they argue when her mother says lessons are too expensive.

• Miranda is also already on the swim team, and she is considering being on the volleyball team so she can play in college.

• Miranda hangs out with her friends Megan and Sammi at school.

• They have grown distant since their friend Becky died.

• Megan hangs around her church friends all the time, and Sammi is boy crazy.

Life as We Knew It from BookRags. (c)2021 BookRags, Inc. All rights reserved.