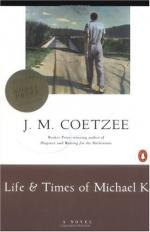 2. What did Michael K only do sparingly so as not to call attention to his good and his new home?
(a) Eat.
(b) Water his crop.
(c) Change the roof.
(d) Take baths.

5. During what part of the camp's training did Michael K collapse which caused him to be taken to a doctor?
(a) Physical.
(b) Waterboarding.
(c) Emotional.
(d) Mental.

1. Who asked Michael K about his face and even shared his lunch with K?

2. The captain decide that the refugees were ungrateful _________ and that they would starve as a result of the explosion.

1. Why did the doctor want the captain to discharge Michael out of the camp?

2. Where was K admitted for medical assistance during the first part of this chapter?

3. What were some of the signs of K's poor condition when he collapsed during physical training?

4. What did K tell Captain Noel when the captain asked him about his garden?

5. What was the doctor's reasoning behind feeling that K was innocent of the charges?

6. What did K tell the doctor when the doctor asks him if he is fasting during his stay at the camp?

7. What news did K not seem very interested in when the doctor told him this information?

8. What did K refuse to do when he was put in with the regular refugees at the camp?

9. How did anyone know that the camp where Michael was at was once a racetrack?

10. What did the doctor think K's biggest mistake was in his life?