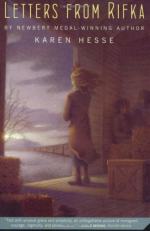 This quiz consists of 5 multiple choice and 5 short answer questions through February 25 - October 2.

5. What excuse does Uncle Avrum use to get the guards to come away from the train?
(a) His son has fallen into a well.
(b) His factory is on fire.
(c) His wife has had a heart attack.
(d) His factory has been robbed.

1. Where does Rifka's family stay while stranded in Poland?

2. The HIAS lady in Antwerp took Rifka to a cowboy movie starring whom?

3. Who is the girl who Rifka plays with in the park across the street from the house?

4. Where does Saul find a place for him and Rifka to stay?

5. Which of the following does NOT describe what Rifka sees in Poland, which is just like her hometown in Russia?