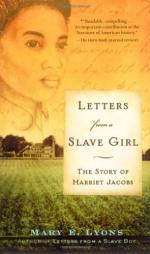 1. What is the premise of "Letters From a Slave Girl"?

This novel is a fictionalized story of the true life of Harriet Ann Jacobs, a young woman born into slavery in 1813 who became a fugitive and eventually gained her freedom in 1852.

2. What does Harriet tell her deceased mother about Margaret Horniblow in her first letter?

In letters written to her deceased mother in 1825, Harriet begins by discussing her owner, Margaret Horniblow. Margaret has fallen ill in July of that year and Harriet fears that she will soon die.

3. What does Harriet hope that her mother's childhood relationship with Margaret will mean for Harriet herself?

Harriet recalls that Margaret, who grew up with Harriet's mother, promised to treat Harriet well. Harriet hopes this means she will give Harriet her freedom when she dies.

4. What is Harriet's fate after the death of Margaret Horniblow?

However, after Margaret's death, Harriet learns that Margaret has not given her her freedom, but has given her to three year old Mary Matilda, Margaret's niece by her sister, Maria Horniblow Norcom. Harriet soon learns that she will have to go live with the Norcom's at their house in town.

Letters from a Slave Girl: The Story of Harriet Jacobs from BookRags. (c)2021 BookRags, Inc. All rights reserved.