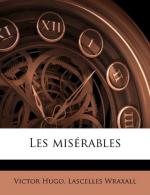 Victor Hugo
This set of Lesson Plans consists of approximately 140 pages of tests, essay questions, lessons, and other teaching materials.

1. What is the name of the churchwarden who tells Marius in Book III of Part III – Marius that his father came to Mass to see him?
(a) Enjolras.
(b) Javert.
(c) Mabeuf.
(d) Gavroche.

2. In Book VI of Part IV – Saint Denis, Gavroche discovers two abandoned hungry children and uses his money to buy them food without realizing they are what?
(a) His cousins.
(b) His younger brothers.
(c) The policeman’s sons.
(d) Spies for the government.

4. What is the title of Book II of Part III – Marius?
(a) “The Grand Bourgeois.”
(b) “Cemeteries Take What is Given Them.”
(c) “The Grandfather and the Grandson.”
(d) “A Dark Chase Requires a Silent Hound.”

5. After discovering the handkerchief he believes is Cosette’s, Marius re-nicknames her what in Part III – Marius?
(a) Azelma.
(b) Eponine.
(c) Ursula.
(d) Fantine.

6. The street urchin named Gavroche in Part III – Marius is actually whose son?
(a) The Tholomyes.
(b) The Thénardiers.
(c) The Pontmercys.
(d) The Gillenormands.

7. In the letter that was left to Marius by his father, he is instructed to find a young man with what name in Book III of Part III – Marius?
(a) Gillenormand.
(b) Thénardier.
(c) Pontmercy.
(d) Magloire.

11. In Book I of Part III – Marius, Gavroche’s parents are living in the Gorbeau House under what pseudonym?
(a) The Myriels.
(b) The Bonapartes.
(c) The Jondrettes.
(d) The Mabeufs.

13. Where did the insurgents in the Paris Uprising of 1832 make their stronghold?
(a) The Faubourg Saint-Martin.
(b) Montreuil-sur-mer.
(c) Petit-Picpus.
(d) Vernon.

1. What is the title of Book IX in Part IV – Saint Denis?

2. Whom does Gavroche discover to be a military spy in Book XII Part IV – Saint Denis?

3. What is Eponine’s last name said to be in Book VIII of Part III – Marius?

4. Before he learns Cosette’s name, Marius refers to her as what nickname in Part III – Marius?

5. On what street are Cosette and Jean Valjean living in Book III of Part IV – Saint Denis?