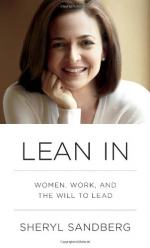 1. When the author became pregnant with her first child, she was running the online sales and operations groups for what corporation, as noted in the Introduction: “Internalizing the Revolution”?
(a) Facebook.
(b) Google.
(c) SurveyMonkey.
(d) Yahoo.

2. What children’s clothing company is described in Chapter 1: “The Leadership Ambition Gap” as having once sold onesies for boys that said “Smart like Daddy” and onesies for girls that said “Pretty like Mommy”?
(a) Tea Collection.
(b) JanieandJack.
(c) Toddlers & Tots.
(d) Gymboree.

3. Where was the first job that Sheryl Sandberg took after graduating college?
(a) Bank of America.
(b) The U.S. Treasury department.
(c) Yahoo.
(d) The World Bank.

4. What author does Sheryl Sandberg quote in Chapter 4: “It’s a Jungle Gym, Not a Ladder” as having observed, “The most common way people give up their power is by thinking they don’t have any”?
(a) Virginia Rometty.
(b) Alice Walker.
(c) Mark Zuckerberg.
(d) Padmasree Warrior.

5. Who was the head of sales and business development at Google that gave Sheryl Sandberg her first opportunity to run a small deal team, according to the author in Chapter 4: “It’s a Jungle Gym, Not a Ladder”?
(a) Gayle Tzemach Lemmon.
(b) Omid Kordestani.
(c) Shankar Vedantam.
(d) Mark Zuckerberg.

1. The author states in Chapter 3: “Success and Likeability,” “A study that looked at the starting salaries of students graduating with a master’s degree from Carnegie Mellon University found that” what percentage of men tried to negotiate for a higher offer?

2. During the time that the author worked at Google, how many employees does she say she hired in Chapter 2: “Sit at the Table”?

3. What 1972 song does the author describe in Chapter 1: “The Leadership Ambition Gap” as being about a little boy who begs his father for a traditional girl’s toy?

4. According to the author in the Introduction: “Internalizing the Revolution,” American women were paid how much for every dollar that their male counterparts were paid in 1970?

5. Who is the Columbia Business School professor that co-ran an experiment to test perceptions of women and men in the workplace in the 2003 study discussed in Chapter 3: “Success and Likeability”?

1. What was the outcome discovered in the study described in the beginning of Chapter 3: “Success and Likeability”?

2. What does the author say regarding the progress that has been made regarding gender equality in the past 100 years in the Introduction: “Internalizing the Revolution”?

3. How does Sandberg suggest one might go about soliciting a mentor in Chapter 5: “Are You My Mentor?”

4. How does Sandberg describe her own process of choosing mentees in Chapter 5: “Are You My Mentor?”

5. Why does the author assert it is imperative to overcome gender stereotypes in the workplace in Chapter 1: “The Leadership Ambition Gap”?

6. What kind of plans does the author say individuals should develop in Chapter 4: "It's a Jungle Gym, Not a Ladder"?

7. How does the author propose overcoming “impostor syndrome” in Chapter 2: “Sit at the Table”?

8. Why does the author prefer to view the system of corporate advancement as a jungle gym rather than a ladder?

9. How does the author equate mentorship with Prince Charming in Chapter 5: “Are You My Mentor?”

10. What advice did Eric Schmidt give to the author in her story from Chapter 4: "It's a Jungle Gym, Not a Ladder"?

Lean In from BookRags. (c)2021 BookRags, Inc. All rights reserved.