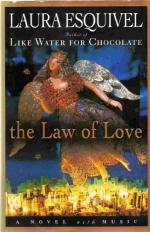 Laura Esquivel
This set of Lesson Plans consists of approximately 161 pages of tests, essay questions, lessons, and other teaching materials.

1. Where is chapter one set?
(a) On the planet Jupiter.
(b) In the city of Tenochtitlan, as the Spanish conquer the Aztecs.
(c) At the pyramids of Teotihuacan.
(d) In twenty-third century Mexico City.

2. Why does Hernán Cortés decide to build a new city on an ancient one?
(a) He believes that God wanted for him to establish an even greater city in its place.
(b) He quickly understood that he had to obliterate all traces of the ancient city in Aztec memory.
(c) He enjoys the altitude and other unique geographical features of the city.
(d) He feels that he should utilize the large labor force available to him in this area.

3. Where does Rodrigo build his home?
(a) Outside of the capitol city, where he can enjoy the countryside.
(b) On a tract of land that includes the Pyramid of Love.
(c) Near the ancient pyramids of Parangaricutirimícuaro.
(d) In the center of town, near the Great Temple, where a select circle of captains are building.

The Law of Love from BookRags. (c)2020 BookRags, Inc. All rights reserved.