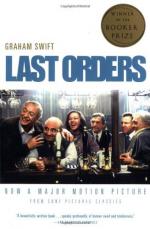 Graham Swift
This set of Lesson Plans consists of approximately 95 pages of tests, essay questions, lessons, and other teaching materials.

• Ray is at the Coach and Horses pub talking to the bartender Bernie about their dead friend Jack.

• The next person to arrive is Lenny and Ray immediately buys him a pint of beer.

• The friends have just come back from Jack's funeral and Lenny is upset that Jack's wife, Amy is not joining them in the pub.
• Vic arrives with a small box under his arm He takes a jar out of the box and tells everyone it is Jack's ashes. Everyone is surprised that it is so light.

• Ray thinks back to 1984 when he was out drinking with Jack, Lenny and Vince. It was the 100th anniversary of the pub and he remembers everyone ogling the barmaid.
• When Vince's wife Mandy arrived at the pub, Jack made her kiss him and patted her on the backside.

• As the regulars reminisce about Jack, their friend...