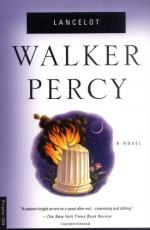 Walker Percy
This set of Lesson Plans consists of approximately 125 pages of tests, essay questions, lessons, and other teaching materials.

2. What did Lancelot claim to Elgin he was afraid of at the end of Chapter 4?
(a) Lucy had been kidnapped.
(b) Lucy was cheating on Lancelot.
(c) Lucy was heavily drinking.
(d) Lucy was doing drugs.

5. In Chapter 4, what does Lancelot refer to Lucy as?
(a) His widowed bride.
(b) His beautiful bride.
(c) His virgin bride.
(d) His sultry bride.

13. The day after, Lancelot went where after breakfast?
(a) To practice shooting in the woods.
(b) To where his wife had been the previous night.
(c) To the office as usual.
(d) To jail.

14. What does Lancelot admit in Chapter 5?
(a) That he and Margot will never be together.
(b) That he wants a child with Margot.
(c) That he loves Margot.
(d) That he has a certain obsession with Margot.

1. Who has recently died at the beginning of Chapter 1?

2. What is one of the reasons why Elgin has done anything for Lancelot?

3. What was a major part of Lancelot and Margot's early relationship?

4. Who was a guest a Belle Isle at the time Lancelot discovered his wife's infidelity?

5. In Chapter 3, Lancelot describes falling into a rut after giving up his occupation and his pursuits, and the rut revolving around what two things?