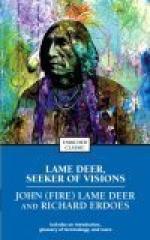 Richard Erdoes
This set of Lesson Plans consists of approximately 155 pages of tests, essay questions, lessons, and other teaching materials.

1. The beginning of the ghost dance began with a sweat bath and the burning of what?

2. In Chapter 8, Lame Deer talks about a young Navajo boy and girl in their apartment in their city. What color of blanket did he put over this young couple?

3. Lame Deer talks about an old white man that invited him and his friend into his cellar to drink and play cards. Lame Deer said that this bootlegger was so drunk he couldn't do what?

4. Richard Erdoes tells Lame Deer that good art cannot be made with what?

5. What does the word inyan mean?

2. Most of the time, how does a person become a medicine man?

3. After the Indians smoke for the fourth and last time in the sweat house, what do they say and how do they exit?

4. Many medicine men get their power from a particular animal. Describe some of the powers and attributes that an elk master or medicine man would have.

5. Describe how Lame Deer's great-grandfather was killed by mistake.

6. Describe some of the things that Indians endured during the sun dance.

7. When Lame Deer was put on trial, how much was he paid per day?

8. Describe the situation described in Chapter 13 when white students gave an old chief a bottle of little pills.

9. What did the old Indian in The Green Frog Skin mean when he said, "now they own the air, too."?

10. Why does Lame Deer say that the pipe is like an open Bible to him and his people?

What does Lame Deer mean when he says, "what you see with your eyes shut is what counts"? How does this relate to the medicine man or wicasa wakan? How could it relate to other tribe members or even Lame Deer himself? Describe your thoughts on this statement and explain how it relates to the book and to the reader.

More summaries and resources for teaching or studying Lame Deer, Seeker of Visions.