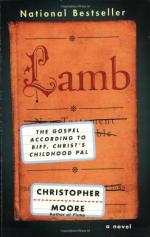 Lamb: The Gospel According to Biff Test | Final Test - Medium

2. What is Joshua given to help him with his injury after hitting his head?
(a) Bread
(b) Myrrh
(c) Wine
(d) A piece of linen

1. Gaspar teaches Joshua about loving his neighbor as his self, which prompts Joshua to become _________ again.

5. What is John doing to Joshua when the sky opens up and declares that Joshua is God's son?

1. How do the monks test those who want to be admitted into the monastery when they arrive at the gates?

2. What puzzles Biff when they approach the fortress of Balthesar that is built into a side of a cliff?

3. Why does Joshua heal the servant of Gaius, even though Biff does not agree with this practice?

4. What is the story Rumi tells Joshua and Biff about his life and his current situation?

5. What does Biff learn about John when Biff and Joshua are at the wedding at Cana?

6. What happens when Joshua is able to let go of all his concepts of self during his lessons?

7. What happens when Joshua gives sight back to the guard he blinded while in a fit of rage?

8. What is Biff's mother's reaction to his return home after so many years away with Joshua?

9. What happens during the first lesson of Buddhism that Joshua takes?

10. Why doesn't Maggie invite Bartholomew to the wedding, though she invites Joshua and Biff?