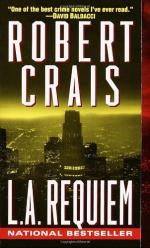 1. Why does Lucy Chenier move to Los Angeles?

Lucy and her son, Ben, move from Baton Rouge to Los Angeles because she is starting a job as a legal analyst for a local television station, and she wants to be closer to her boyfriend, Elvis Cole.

2. Why does Joe Pike come to Cole's house in Chapter 1?

Pike comes to Cole's house because Pike received a call from his friend Frank Garcia to help find his missing daughter, Karen. The police will not help at first because Karen has not been missing that long.

3. How does Pike know Frank Garcia?

Pike used to date Frank's daughter, Karen. Pike tells Cole that they were close, but he tells Cole he broke her heart. Pike does not give any more details on their relationship at this point.

4. Why do Cole and Pike drive to Lake Hollywood?

Cole and Pike drive to Lake Hollywood because that is the route that Karen Garcia runs. They want to retrace her steps with the hope of finding either her or a clue that will tell them where she is.