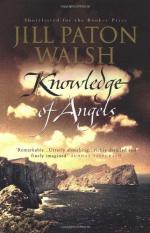 • The island the story takes place on is like Mallorca, a Spanish island in the Mediterranean Sea, but it is not Mallorca.

• Jamie, a shepherd finds the nevados, men who cut ice to sell in town and tells them an animal is taking sheep. He asks for help.

• They track the animal to a cave and as Galceran starts to club the animal to death, Jamie stops him because it is a human child.

• The nervados keep the child to collect money to show her off, but end up giving her to Juan in exchange for two bottles of wine.

• Miguel and Lazaro, two fishermen see a man swimming in from the sea and rescue him. When he awakens he says he will reward them...