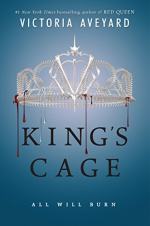 Victoria Aveyard
This set of Lesson Plans consists of approximately 113 pages of tests, essay questions, lessons, and other teaching materials.

1. What does Mare do to her books after Nanny's suicide?
(a) Soaks them in water.
(b) Throws them out the window.
(c) Throws them at her guards.
(d) Tears them apart.

2. Who does Nanny make her face look like before she swallows a suicide pill?
(a) Queen Elara.
(b) The former King.
(c) Prince Cal.
(d) Evangeline.

3. What happens to Prince Alexandret?
(a) He returns to Piedmont.
(b) He is executed in the Bowl of Bones.
(c) He is shot during the assassination attempt.
(d) He joins the Scarlet Guard.

1. What does Mare do to her guards when she tries to escape?

2. What makes Cal anxious about the attack on Corvium?

3. What is NOT one of Mare’s guards’ nicknames?

4. What is the recently abandoned Scarlet Guard base?

5. Who killed the former King?

1. How does Mare discover that there was a Scarlet Guard attack on Corvium?

2. Why does Evangeline bring Mare to face Maven's court during the party?

3. How long is Mare a prisoner before she faces Maven again? Who brings her to talk to Maven?

5. Why did Maven have a new throne instead of using his father’s?

6. Why does Mare feel pity for Maven when he makes her face the court?

8. Why does Maven always refer to the Scarlet Guard as “terrorists”?

9. Why does Mare feel hopeful when Maven lets it slip that Norta is fighting two wars?

10. After the assassination attempt, what is learned about the faction? Who do they want on the throne?