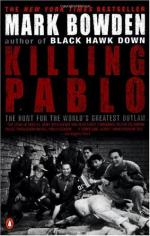 Mark Bowden
This set of Lesson Plans consists of approximately 99 pages of tests, essay questions, lessons, and other teaching materials.

Divide the class into two groups and ask each group to devise a political party based on how they think they want to run the classroom. Once each group has developed their ideas, conduct a debate between the two groups.

Study a crime from newspaper reports and write out a defense for the accused.

Write a Haiku that you think summarizes the book.

Choose one of the characters from the book and think about how he or she would look, walk and act in general. Find some clothes from home and bring them into class. The task is then to walk around the class dressed up and acting like your character. The only thing you cannot do is...