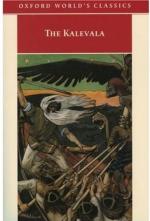 1. What does Ilmarinen use to make himself a new wife?
(a) Silver and gold.
(b) Grease and herbs.
(c) Sticks and mud.
(d) Water and seaweed.

3. Who helps Vainamoinen cure the plagues and afflictions Louhi sends into his land?
(a) An old man.
(b) Lemminkainen.
(c) One of Louhi's daughters.
(d) Ilmarinen.

4. How does Vainamoinen keep Louhi and her soldiers from catching up with him and Lemminkainen and Ilmarinen?
(a) He conjures a reef on which their ship wrecks.
(b) He tricks them into going the wrong direction.
(c) He sings them to sleep.
(d) He kills them with his sword.

5. How does Kullervo perform his tasks on the family farm?
(a) He invents tools for every little task.
(b) He whips everything into shape.
(c) He changes how everything is done.
(d) He damages everything he touches.

6. How does Ilmarinen punish Louhi's daughter?
(a) He turns her into a seabird.
(b) He eats her.
(c) He tells vicious stories about her.
(d) He throws her out into the cold without clothes.

7. How does Ilmarinen get one of Louhi's daughters to go with him?
(a) He threatens her.
(b) He promises her jewelry.
(c) He kidnaps her.
(d) He sings to her.

8. Where do Vainamoinen and Ilmarinen go to look for the flame the Creator sends?
(a) In the forest.
(b) At the bottom of a vast lake.
(c) In the heavens.
(d) In the ocean.

11. When does Kullervo's mother die?
(a) While he is at war with Untamo.
(b) While he is looking for the meaning of his life.
(c) While he is on his way home from the sea.
(d) While he is pleading with her for permission to leave.

12. Who survives Untamo's attack on Kalervo's home?
(a) Kalervo.
(b) A pregnant woman.
(c) Ilmarinen.
(d) The daughter of Louhi.

13. What preparations are made for the marriage of Vainamoinen and the Maid of Pohja?
(a) Beer is prepared.
(b) Songs are taught to the musicians.
(c) A butcher is taught how to butcher an ox.
(d) An ox is butchered.

14. Whom does Lemminkainen seek out to help him get revenge on the armies that had pursued him?
(a) Annikki.
(b) The Storyteller.
(c) Tiera.
(d) Frost.

15. What causes Lemminkainen to rush home to Pohja?
(a) Messengers from Louhi.
(b) A flock of seagulls.
(c) A flock of crows.
(d) Fires.

1. What is Louhi worried about, with regard to the wedding feast?

2. What allows Lemminkainen, Vainamoinen, and Ilmarinen to pass through the waterfall?

3. In what form does Louhi attack Vainamoinen, Ilmarinen, and Lemminkainen's ship?

4. Where does Lemminkainen hide after the wedding feast?