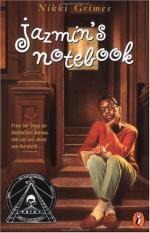 1. What are Jazmin's parents arguing about the night before she is born?

Jazmin's mother and father are arguing about how they should spell Jazmin's name the night before she is born.

2. What is Jazmin's father's opinion of jazz?

3. When does Jazmin think that people will learn to spell her name correctly?

Jazmin believes people will learn to spell her name correctly when they see it on the front of his best selling novel.

4. Why does CeCe hear her parent's argument?

5. Why does Jazmin's father want her name spelled as it is?

Jazmin's father wants his daughter's name to be a tribute to jazz music.